1990s grunge fashion started with  a genre of music originating in Seattle (sometimes referred to as the Seattle sound) called Grunge. It lasted from the mid 1980s to the mid 1990s. It is a sub-genre of alternative rock that emerged as a fusion of punk, alternative, and heavy metal. The grunge movement was heavily influenced by bands such as Nirvana and Pearl Jam. Most of the time these artists would be seen on stage crudely dressed in flannel shirts.  Some people would even go as far as to say they look like they just rolled out of bed.

Grunge followers weren’t necessarily hippies but they sure didn’t give a damn about their appearance. Now 1990s grunge fashion is making its way back to mainstream, for those of us who grew up in the 90s these looks are all too familiar. I remember tv shows like Blossom, Friends, and Beverly Hills 90210 all had their grunge moments. If you are feeling this trend here are some tips on how to go grunge. Check out the looks.

1. Study the roots of grunge. Don’t just start calling yourself a grunger if you have no idea what the movement is about. Labeling yourself will only make you a poser.

2. Opt out of mainstream trends like  Mohawks, rocker tattoos, etc. Still, don’t go out of your way to  “nonconform.” It’s okay to go with your own sense of style and not bend to everybody’s  ideals. A pair of vintage round sunglasses are a great way to start. 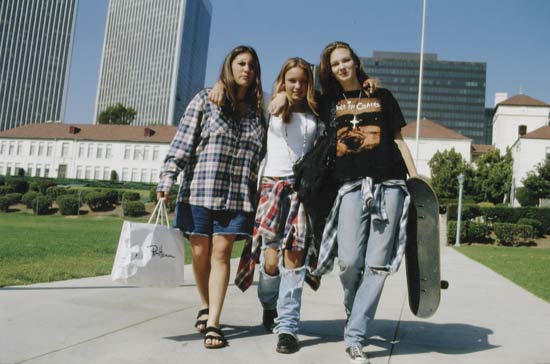 3. Don’t care about your appearance too much. I’m not saying don’t comb your hair or get the cold out your eye, but spend minimal time shopping and grooming. Get a pair of old lose fitted bootcut jeans out your closet and slit them at the knees. If you want you can even take a big chunk out of it, then throw it in the wash to get the threading to loosen.

4. Stop caring about what other people think or how sexy and cute the other girl looks on the train. A true grunger owns every bit of hot mess that their outfit is and they love it! Oversized leather jackets and jeans jackets are a great staple piece. 5.  Don’t be a drama queen or a drama king. You don’t have to literally look like you are trying not to give a damn about your outfit. That simply means you missed the point, grunging takes no effort. You shouldn’t be runing through your closet for hours trying to figure it out. When all else fails a pair of baggy faded jeans and rugged boots will make the cut for him or her.

6. Another staple piece for the grunge fashion trend is flannel shirts. I can’t emphasize that enough. This piece was a very popular piece among grunge bands because it was readily available in the Pacific Northwest climate and comfortable. Followers adapted the look. It didn’t matter the season. If it got too hot they would simply tie it around their waists until even that became a statement.  Still, you don’t have to go out of your way to wear a thick flannel shirt, lighter plaids are fine, wear whatever is comfortable.

Last but not least don’t let the critics force you into a box if you want to grunge, Do it!