Get The Look: Beyoncé Shows Off Her Post Baby Body in the April Issue of SHAPE!

Beyoncé shows off her post baby body in the April Issue of SHAPE and she looks fab! After becoming a mother and gaining 57 pounds (side eye) during her pregnancy, she pulled a Heidi Klum and stepped out 6 weeks post baby. Beyoncé says a healthy diet and dance workouts helped her reclaim her pre-baby body.

I didn’t have a lot of time to lose the weight because I scheduled a show three months after I gave birth, which I would never do again!” she told the Magazine.

Well Mrs. Carter is back in the limelight and reclaiming the throne as she tells her contenders to “bow down”.  She is about her business in 2013 and one baby don’t stop no show! It started with her controversial performance at the presidential inauguration to her jaw-dropping Super Bowl halftime show, her documentary Life is But a Dream on HBO in February, and her scheduled new tour “The Mrs. Carter Show ” starting in April. Not to mention she has an album due out at the end of the year! She isn’t slowing down any time soon.

The Karla Colletto Colorblock Bikini costs $196. The actual name of the top is a ‘rash guard’–also known as a rash vest or rashie, it’s a type of water wear, an athletic shirt made of spandex and nylon or polyester. You can also substitute the rash guard for a sexier underwire bra top in the same color family (Purple/Papaya/Citrus). I also found a collection of colorblock swimwear for you to $hop for less. 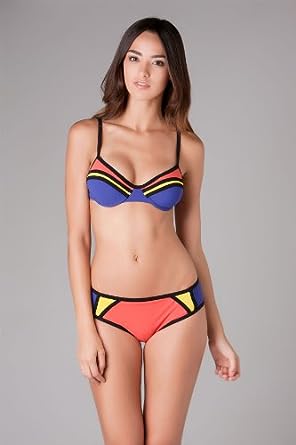 1 Responses to “Get The Look: Beyoncé Shows Off Her Post Baby Body in the April Issue of SHAPE!”